You are here: Home1 / Blog2 / ‘Irretrievable breakdown’ after Owens v Owens
Request a Call Back

The recent Court of Appeal decision in Owens v Owens has very clearly placed the spotlight on divorce and the anomaly which means that a marriage which has broken down ‘in fact’, has not necessarily reached the point of irretrievable breakdown ‘in law’.

The case of Owens v Owens [2017] EWCA Civ 182 concerned a couple who had been married since 1978 and had 2 adult children. They separated in February 2015, although the wife, Tini Owens, had instructed solicitors to send a draft divorce petition to her husband, Hugh, in 2012. This was not pursued. The wife had an affair over 2012/2013. and finally filed a petition for divorce in May 2015 citing the irretrievable breakdown of the marriage based on her husband’s unreasonable behaviour. There is no doubt that Tini Owens was extremely unhappy in the marriage. However, her husband disputed the allegations that his behaviour was unreasonable and that his wife could no longer be expected to live with him. The judge agreed with the husband.
When the Court of Appeal heard the case – on Valentine’s Day of all days – they were asked to find that the judge had adopted a flawed process, in that:

As a subsidiary argument, counsel for Mrs Owens stated that her rights under Articles 8 and 12 of the European Convention of Human Rights were engaged. As such, the relevant authorities needed to be “reviewed in line with current thinking and social norms” to establish if they were consistent with the wife’s rights under the ECHR.
As many of you will have read in the press, the Court of Appeal was unable to allow the appeal. The decision made it clear that the Court’s role was to apply the law, not make the law, and the judge in the Central Family Court had correctly addressed the issues. He had made the findings of fact that were said to be missing; he had also addressed both the ‘objective’ and ‘subjective’ elements that go to establishing whether a marriage has irretrievably broken down. The judge agreed that in practice his decision left both parties “…stymied in lives neither of them wish to lead”, but he was unable to find that Mr Owens’ behaviour, as set out in the petition, was such that Mrs Owens could not “…reasonably be expected to live with the husband. The fact that she does not live with the husband has other causes.”

Grounds for divorce in 2017

While many people will say that their divorce is on grounds of ‘adultery’ or ‘unreasonable behaviour’, the legal basis for a divorce to be granted is that the relationship has irretrievably broken down. This irretrievable breakdown must be shown to be for one of 5 ‘facts’ – which is where the adultery, unreasonable behaviour, desertion or separation (either for 2 years, with consent, or 5 years without) comes in. Although the legislation is stated to be ‘always speaking’ – allowing the courts to look at the law in the context of the current social standards and attitudes, the courts cannot change the law, only apply it.
When considering the irretrievable breakdown on grounds of unreasonable behaviour, the courts must look at the context of the parties involved and of their marriage. The question to ask is whether, in the particular marriage, and in relation to the particular couple, all the circumstances, and the cumulative effect of the behaviour complained of, has the respondent behaved in such a way that the petitioner cannot reasonably be expected to live with the respondent. In Owens v Owens, the original judge found that the behaviour complained of was, in all the circumstances, not such behaviour. It was not unreasonable to expect Tini Owens to continue to live with Hugh Owens. The fact that she did not wish to do so was another matter, but not one on which the court could base a divorce. In the absence of the husband consenting to divorce, she would eventually be able to obtain a decree nisi after 5 years’ separation.

The need for a ‘no fault’ divorce

While the Court of Appeal was unable to overturn the original decision, the judges did go on to express a view that the laws relating to divorce were out of date. In reality, it is unusual to come across a defended divorce such as this. The majority of couples basing irretrievable breakdown on unreasonable behaviour will collude in the creation of a divorce petition that treads a line citing sufficient unreasonable behaviour and the assertion that it is no longer reasonable to expect the petitioner to continue to live with the respondent to allow the courts to grant the divorce, without going into too much detail.
The Court of Appeal recognised this ‘fiction’ in its judgment – without criticism. In fact, they likened it to the practice in the early 20th Century of the ‘hotel divorce’, by which one party would pretend adultery for the purposes of achieving the facts necessary to grant the divorce.
As the law moves to finding less acrimonious and more constructive ways of achieving divorce, for example through use of dispute resolution, it has been recognised that the less contention involved, the more likely it is to achieve a swift and practical resolution which will work for the parties going forward. This is particularly helpful where children are involved.
Many family lawyers, myself included, support the work of Resolution to achieve a ‘no fault’ divorce. The ‘No Fault Divorce’ bill presented to Parliament in October 2015 failed to pass the first reading in the House of Commons. Sadly, the day after the Court of Appeal hearing in Owens v Owens, a written Parliamentary answer stated that there were no plans to change the existing law on divorce.
The facts and the decision in Owens v Owens highlight the inadequate nature of the divorce laws in today’s climate. The Court of Appeal recognised the problem, and we will continue to lobby for the changes that are needed. 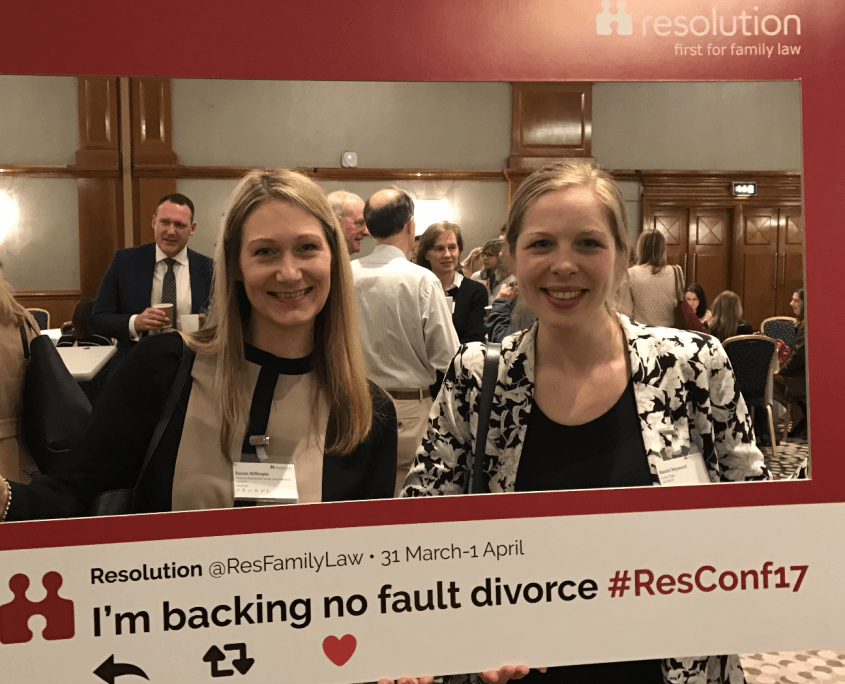 Co-operation and contempt in divorce

5 Things to consider before turning to Divorce

5 good reasons to have a prenuptial agreement

In dealing with my divorce case

In dealing with my divorce case, which was complicated because my husband and I jointly owned a business, Susi Gillespie has always been available to chat over issues I was unsure about and, on the rare occasions she was not available, and also when I sent emails, would contact me back, invariably on the same day. She made a subject that I found complex, comprehensible, always explaining in ‘plain English’, thus making the whole process easier to follow and understand and, as such, less stressful.

She always acted in a professional manner and kept me informed of the progress of my divorce, so that I knew how things were going and what I needed to do.

I would recommend, and indeed have recommended, Susi to my friends, confident in the belief that she would provide the same excellent service to them, as she has provided for me.

So, you think you’re a genius?
Scroll to top